In astronomy, new moon is the phase of the Moon when it lies closest to the Sun in the sky as seen from the Earth. More precisely, it is the instant when the Moon and the Sun have the same ecliptical longitude.  The Moon is not normally visible at this time except when it is seen in silhouette during a solar eclipse. Information culled from Wikipedia.

The moon has been celebrated in song and movies;scary tales and fairy tales. One of my favorites is the movie Moonstruck . The theme song sung by Dean Martin, Amore- “When the moon hits your eye like a big pizza pie, that’s Amore. “

Loretta Castorini, a book keeper from Brooklyn, New York, finds herself in a difficult situation when she falls for the brother of the man she agreed to marry (the best friend of her late husband who died seven years previously).

Blue Moon, Fly Me To The Moon, Moon River, Honeymoon,Man in the Moon: songs I can’t forget and movies where the warning “not to walk on the moors” included a shot of the moon.

Astronauts landed . . .on the moon! Thrilling to see and hear Neil Armstrong speak.

From the BBC. 1969: Man takes first steps on the Moon. American Neil Armstrong has become the first man to walk on the Moon.The astronaut stepped onto the Moon’s surface, in the Sea of Tranquility, at 0256 GMT, nearly 20 minutes after first opening the hatch on the Eagle landing craft. Armstrong had earlier reported the lunar module’s safe landing at 2017 GMT with the words: “Houston, Tranquility Base here. The Eagle has landed.”

As he put his left foot down first Armstrong declared: “That’s one small step for man, one giant leap for mankind.”

He described the surface as being like powdered charcoal and the landing craft left a crater about a foot deep.

‘We came in peace’

The historic moments were captured on television cameras installed on the Eagle and turned on by Armstrong.

Armstrong spent his first few minutes on the Moon taking photographs and soil samples in case the mission had to be aborted suddenly. 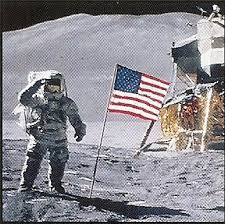