The year was 1990. The scene was shot in the famous large book store of Fifth Avenue in NYC. Gene Wilder had time to look at Gilda Radner’s book, “It’s always Something.” We stood close together as the Director, the famous Leonard Nimoy rode back and forth on a small track using a hand held camera. The technicians were star struck watching the thin intense man. I spoke softly to Gene Wilder. We both had suffered a loss recently: me of my beloved husband and Gene’s Gilda, the well known comedian of Saturday Night Live, died of cancer. Tears fell until cameras were ready. What a day. Afterward we hugged and moved on. I shook hands with Mr. Nimoy and told him it was a pleasure watching him work. The movie was Funny About Love.

The two men standing outside during a break.

The movie: Funny About Love, location a night shoot at the renowned book shop Brentanos on Fifth Avenue, the director none other than Leonard Nimoy. Later I had to buy back my car from a parking lot. So expensive in the area. The scene was a crowded with actors around Gene Wilder. We had time but I was next to him. We talked. I extended my sympathy for his loss of wife Gilda Radner and told him my husband had died recently. We hugged tight. He shed some tears as he held a copy of her book. Then the scene, shot in one take with Mr. Nimoy riding in on a track with a hand held camera. Applause, applause. Moment over. A few months later, walking on 45 th toward  the ABC studio One Life To Live, I saw Gene with a pretty woman. We waved at each other. Did he remember me? Probably not. I’ll never forget him. What a sweetie. 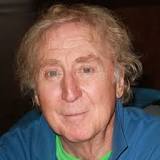 Liberal political cartoonist Duffy Bergman (Gene Wilder) falls in love with and marries a chef, Meg (Christine Lahti). All goes well–for awhile–until Duffy thinks about having a baby, and Meg wants her career. They drift apart, and Duffy finds another “love of his life,” Daphne (Mary Stuart Masterson). Only after Daphne becomes pregnant does Duffy realize how much Meg means to him.